With a strong emphasis on community and stakeholder building, the EOSC Stakeholders Forum 2018, organised by the EOSCpilot project, opened at the Austria Center Vienna on 21 November.

Held immediately prior to the Official Launch of the European Open Science Cloud (EOSC) on Nov. 23 under the Austrian Presidency of the Council of the European Union, this year’s installment of the forum was timely and the importance of the science cloud to the European policy agenda was evident.

#EOSCStakeholdersForum Keynote presentation of JC Burgelman of the EC's DG #Research and #Innovation: "You never walk alone. Implementing the #EOSC roadmap". Access it now here: https://t.co/arw8oEPESu. You can find it in the Day 1 Plenary part of the agenda. pic.twitter.com/bLSiEeDJ75

Plenary Session of the EOSC Stakeholders Forum was opened by EOSCpilot Coordinator Juan Bicarregui where he highlighted the current state of the EOSC as it is being launched on 23 November.

He said that the EOSC was neither a complete system, nor a start from scratch, but rather something in between - a system that can already perform its key functions but is still in need of further development to bring it to its full form.

“This is not like a spacecraft launch where all the components are available, nor is it like the groundbreaking ceremony for constructing a building where we are starting with nothing. This EOSC launch is more like launching a ship - it may not be fully functional, but it floats,” said Juan. 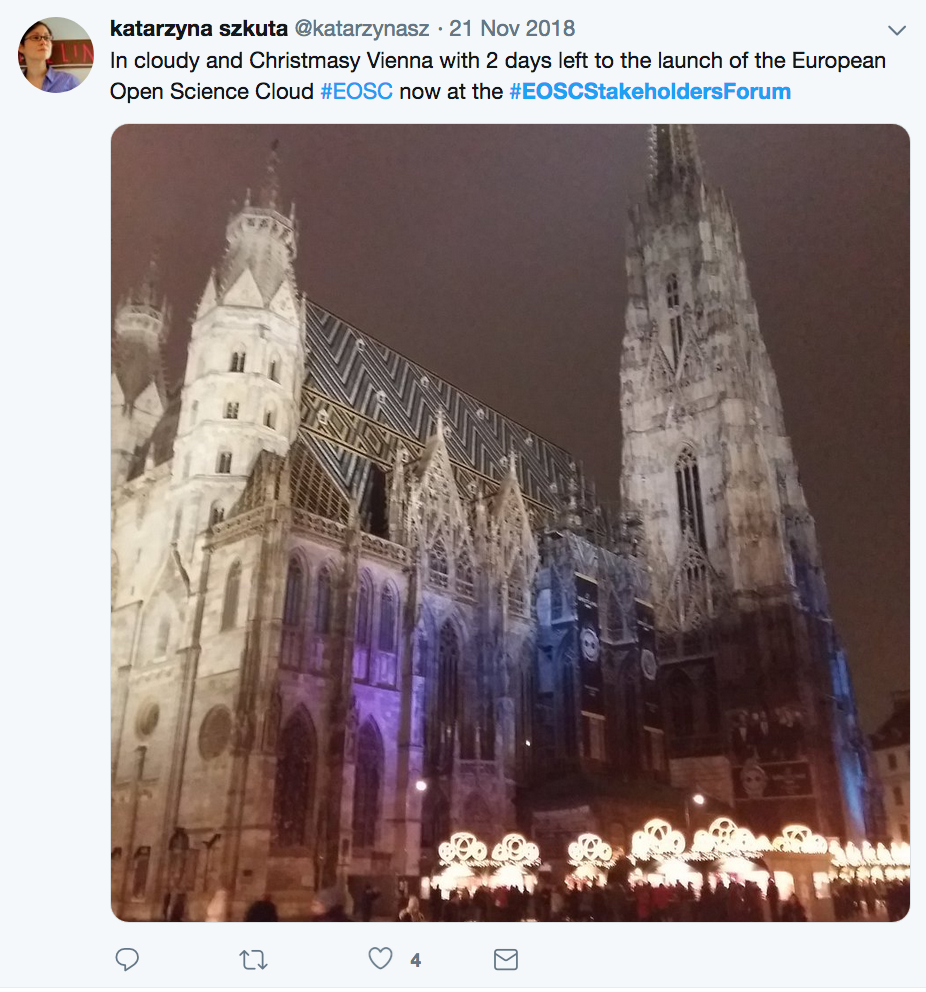 The Forum and EOSC’s Governance

“The Strategic Implementation Roadmap has now defined what the Stakeholders Forum does, and it will become a sounding board to the EOSC Executive Board. Your contributions here today and in the future will help define the EOSC in the next few years,” said EOSCpilot’s coordinator, adding that outputs from this year’s installment of the EOSC Stakeholders Forum 2018 will also be submitted to the first appointed Executive Board members that were announced on 23 November 2018 along with the EOSC launch.

He then closed his talk by comparing EOSC implementation roadmap to a marathon. “The EOSC Implementation Roadmap isn’t an empty road. Neither is it a race. It’s more like a marathon where it’s more about the community and working for a cause, and I think this is a good analogy for what we are trying to do in these next few days,” ended Juan Bicarregui.

Following the welcome speech, various projects - EOSC-hub, eInfraCentral, and Research Data Alliance Europe working towards the realisation of EOSC presented their projects and their efforts towards an EOSC in Practice.

From oblivion to existence

Delivering the keynote for the inaugural session was European Commission - Research and Innovation Director General Jean Claude Burgelman, who spoke about the EOSC Roadmap and the EC’s perspectives on implementing the EOSC.

At the outset, the director general expressed his immense gratitude to the EOSCpilot project for the work that was executed so far. “EOSCpilot has defined the scope of the EOSC and has gotten off the ground what originally did not exist before. Now, it is launched and this is because of projects like yours that have worked hard to do it,” said Jean Claude while also acknowledging the collaborative work that was needed to get the EOSC up and running.

“The science cloud has been an activity on our agenda in the past 2-3 years,” Jean Claude said adding, “It is a vision that was articulated in 2015 as a European vision. We wanted all science to have a European solution of interconnectivity. It isn’t a single service or machine somewhere - it is a federation of what exists and we are merely merging what we already have.”

Not ‘made in Brussels’

He explained that to get to the launch, there were three stages. First came the vision in 2016 where it was billed as part of the larger Digital Single Market strategy of European Union. The second stage came when they published the EOSC Implementation Roadmap Staff Working Document (SWD) based on extensive consultations with various stakeholders. Finally, the 3rd stage came this year, 2018 with the adoption of the SWD.

“So, from the vision, we have articulated the six action lines of EOSC. Anyone who asks what will we do after the EOSC launch, there you have it. In doing all this, we had plenty of discussions with all stakeholders, and what we will present during the launch is not an EOSC made in Brussels. To do this, EOSCpilot’s role was essential,” he said.

Jean Claude also added that while there was a strong policy push with key players being present, as evidenced in the past EOSC Summits, majority of the work has been done in conjunction with all stakeholders.

As the EOSC gained ground, the director general reported that more and more scientific stakeholders came on board to support the EOSC. “Looking at the list of signatories of the EOSC Declaration, we have now updated this list and now there are 100 in this ‘coalition of doers’. They have all made the commitment to align with the EOSC and this list, along with the full list of commitments will be handed over to the new EOSC Governance Structure.”

Some of the key elements of the report include what is needed for a minimum viable ecosystem, business models, practical recommendations for the EOSC portal and the working groups that can be set up. Jean Claude also said that the EC will stop the creation of EOSC Working Groups as the new governance structure has the necessary mandate to set these up. 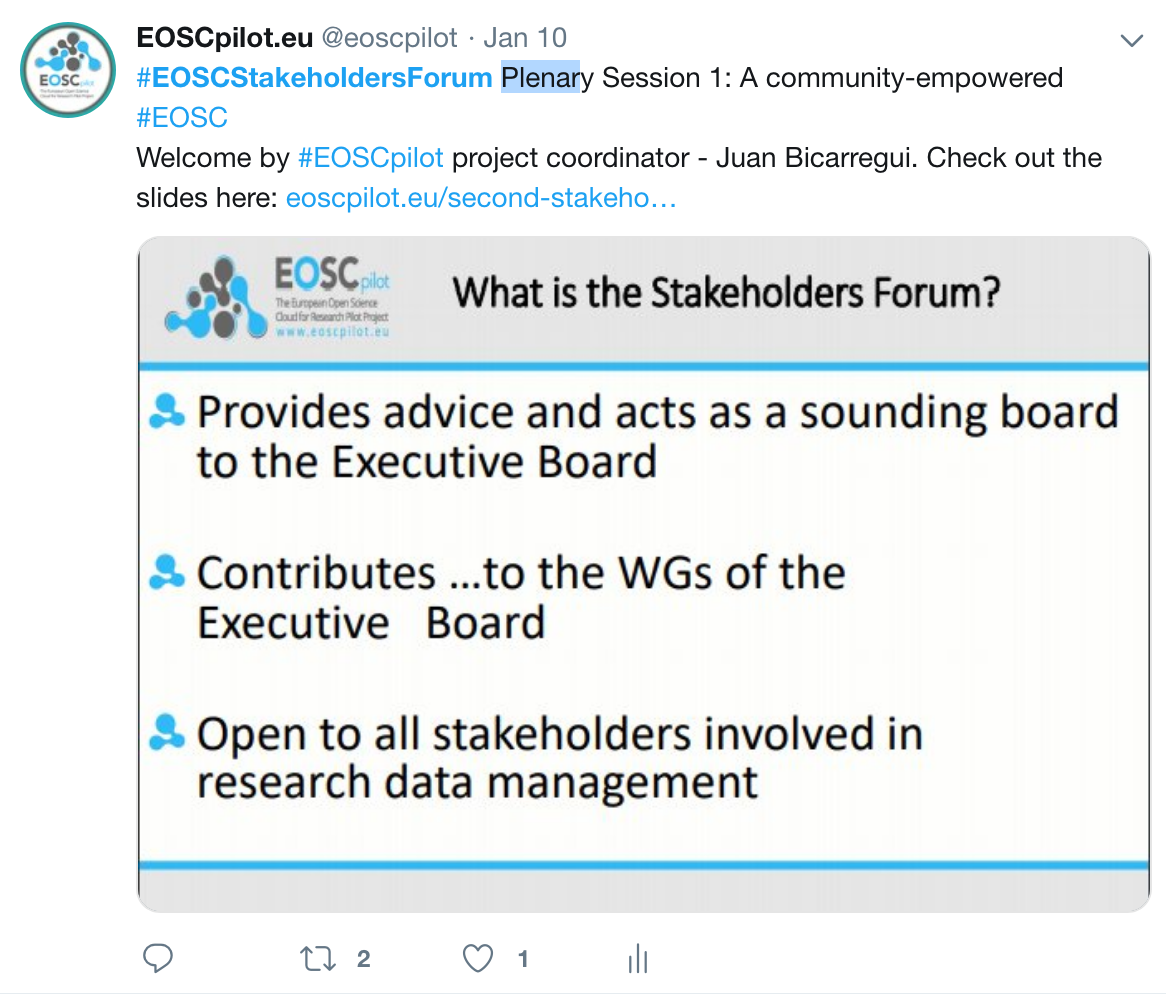 “Without FAIR data, we won’t have an EOSC at all,” said Director General Burgelman. He continued, “This is a key concern for the future and that’s why we have set up an expert group. An extensive consultation was very well taken up where 500 comments were received”.

The report Turning FAIR into Reality contains several key elements particularly that FAIR should not just apply to publications but to all digital outputs. The report also covers key concepts such as FAIR digital objects and the FAIR ecosystem as well as interoperability frameworks.

It also highlighted the importance of data scientist and data stewards skills, metrics and incentives, as well as investments and sustainability to encourage FAIR adoption.

“As you can see, it is not longer just intentional, but practical, with an eye to implementation. From the side of the EC, we think that pushing FAIR interoperability will be a core component of the science cloud,” he said.

Director General Burgelman briefed the audience about the launch of the EOSC Governance Structure. “Three years ago, the bottleneck was in FAIR data and governance. Finally, we are able to present it. EOSC’s Governance will be a three-layer body that will be focused on the actions needed for the initial development of the EOSC. However, this will just be the initial structure as eventually, there will be a final Governance Structure later in 2020. Think of it like a beta version.”

Jean Claude continued, “There will be an EOSC Board, an Executive Board and the Stakeholders Forum. The EOSC Board will comprise of Members States and the EC. The Executive Board will have 11 seats which is mandated to set up Working Groups needed to tackle whatever issues the EOSC needs to look at.”

For the EOSC’s Phase 1 which is expected to last until 2020, Jean Claude said that the EC is financing various calls to support the core functions and milestones connecting those under the European Strategy Forum on Research Infrastructures (ESFRI) to the EOSC. The Member States will also be flagging national initiatives that they want to link.

Additionally, he said that future research funding will be pushed only for those taking into account FAIR data principles in their outputs.

The director general then concluded by highlighting the success achieved through collaboration. “When we presented this work in the beginning, we highlighted that if we really wanted to play on a world scale, we need to stick together. We will reach further together than if we do it alone. For something that wasn’t on the agenda in 2015, we have achieved much seeing where we are now. At present, the development of the EOSC is up to you. As you can see, the EC is only one player on this board. It is up to you, stakeholders to finish this.”

All the sessions pages and the whole programme for  EOSC STAKEHOLDER FORUM can be found at this link: https://eoscpilot.eu/stakeholders-forum/2018-edition/second-eoscpilot-st...